PRODUCTS
level vials
A spirit level or bubble level is an instrument designed to indicate whether a surface... 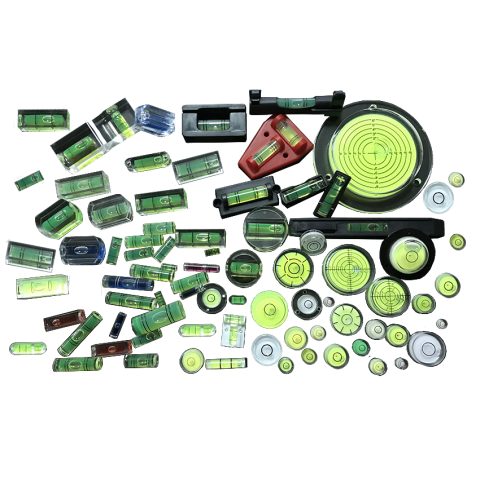 A spirit level or bubble level is an instrument designed to indicate whether a surface is horizontal (level) or vertical (plumb). Different types of spirit levels may be used by carpenters, stone masons, bricklayers, other building trade's workers, surveyors, millwrights and other metalworkers, and in some photographic or video graphic work.

Original spirit levels had two banana-shaped curved glass vials at each viewing point and were much more complicated to use. In the 1920s, Henry Ziemann, the founder of Empire Level, invented the modern level with a single vial. These vials, common on most ordinary levels today, feature a slightly curved glass tube which is incompletely filled with a liquid, usually a colored spirit or alcohol, leaving a bubble in the tube. At slight inclinations the bubble will travel away from the center position, which is usually marked in some manner.

Alcohols such as ethanol are often used rather than water for a variety of reasons. Alcohols generally have very low viscosity and surface tension, which allows the bubble to travel the tube quickly and settle accurately with minimal interference with the glass surface. Alcohols also have a much wider liquid temperature range, and won't break the vial as water could due to ice expansion. A colorant such as fluoresce in, typically yellow or green, may be added to increase the visibility of the bubble.

Some spirit levels are capable of indicating the level of a surface between horizontal and vertical to the nearest degree. The crudest form of the spirit level is the bull's eye level: a circular flat-bottomed device with the liquid under a slightly convex glass face which indicates the center clearly. It serves to level a surface in two perpendicular directions, while the tubular level only does so in the direction of the tube. The most sophisticated spirit levels are guaranteed accurate to five-ten-thousandth of an inch (.0005) per inch and are much easier to read because of their green/yellow color. Where a spirit level must also be usable upside- down, the banana-shaped tube is replaced by a barrel-shaped tube. The upper internal surface of the tube is thus always of the appropriate shape.